What does the future hold for our climate?

The Bureau of Meteorology (BOM) and CSIRO play an important role in monitoring and analysing the observed and predicted future changes in Australia’s climate. The biennial State of the Climate Report highlights long-term changes in our climate and their impacts – how they will impact the Australian community and our everyday lives. In its sixth iteration, there are few surprises in the Report: the alarming warming trends continue and the scientific evidence of the influence of human activity on the climate is only becoming stronger.

Climate impacts the health and wellbeing of communities and ecosystems, affecting the livelihoods of all Australians. Australia needs to plan for and adapt to the changing climate now and in the years ahead. With this knowledge, we can make informed decisions and be better prepared.

Australia’s climate is highly variable. One of the strongest climate drivers are the fluctuations in temperature between the ocean and atmosphere in the Equatorial Pacific, described as the El Niño Southern Oscillation (ENSO) cycle. Deviations from normal sea surface temperatures can have large-scale impacts not only on ocean processes, but also on global weather and climate. Warmer or colder than average ocean temperatures in one part of the world can influence weather around the globe.

La Niña and El Niño refer to the periodic warming and cooling of western Pacific Ocean surface temperatures respectively. El Niño years are typically warmer and drier over eastern Australian while La Niña years are the opposite. 2019, the hottest year in Australia on record, was attributed to El Niño. 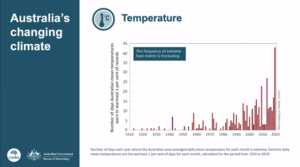 When considering the cause of this warming, there is an undeniable correlation with an increase in greenhouse gas emissions from human sources. The rate of carbon dioxide rise was under 10 parts per million (ppm) per century for the past 2000 years, whereas it is currently increasing by 2-3 ppm per year alone. This rapid, human-driven increase gives ecosystems less time to adapt to changing climates. ‘We’re putting a sudden shock into the system,’ says Lynette. Rainfall and other weather systems are changing too. Rain in April-October in southern Australia is needed for crops to grow and dams to fill, but rainfall has decreased in recent decades. Frontal rain systems used to be reliable but have now moved so far south that they are no longer hitting the continent. When strings of dry years hit, we need to consider whether this is natural variability and will swing back towards years of more rain, or whether we need to prepare for drought. 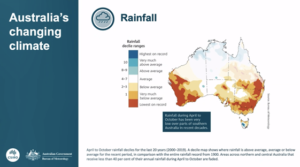 On average, it takes four years to cycle between La Niña, El Niño, and back, affecting rainfall, floods and droughts. During La Niña, warmer surface temperatures on western side of the Pacific Ocean, result in greater water evaporation and the generation of rain clouds. This increases the likelihood of above average rainfall across much of Australia during spring, and eastern Australia during summer. The last La Niña event (2010-2012) resulted in Australia’s wettest two-year period. In 2020, another La Niña event is underway, bringing greater rainfall and hopefully lead to a milder bushfire season, but also potentially floods and cyclones.

Unsurprisingly, with higher global average temperatures, the rate of sea level rise is accelerating. Global sea level has risen by around 25 cm since 1880 and continues to rise at a rate of over 3 cm per decade. The Earth gains heat due to increases in greenhouse gases in the atmosphere, and most of this heat is being taken up by the oceans. Oceans around Australia are also becoming more acidic, which has a great impact on marine life and coral reef systems. 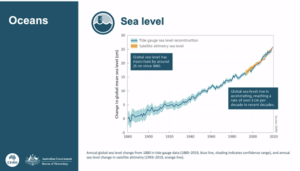 Much of the State of the Climate 2020 Report outlines what we have experienced, but it also projects what is to come. Simulations based on global climate models predict a continued rise in global temperature and sea level, more frequent and intense heatwaves, less frequent but heavier rainfall, and longer, more dangerous fire seasons. Soon we will no longer be considering how we get through a single intense year, such as 2019, but how we can make it through a stretch of years with no respite. It is not all doom and gloom, however. The BOM and CSIRO are investing a lot of effort to solve these problems. The climate has been set on a warming path – the long-lived greenhouse gasses that are in the atmosphere and the extra energy soaked up by oceans have secured the warming trend continuing for the next few decades. But the sooner we take action, the sooner we will see the lessening of impacts and divergence from the alarming projections in climate models and simulations. ‘The climate will continue to change if we do not change,’ says Lynette.

This article follows Senior Climatologist Dr Lynette Bettio’s presentation to the Royal Society of Victoria on the State of the Climate 2020 Report.
Written by Catriona Nguyen-Robertson