Soil Carbon – Keeping it in the Ground

What if we could reverse climate change, increase biodiversity and feed everyone with a single solution? That almost sounds too good too to be true. 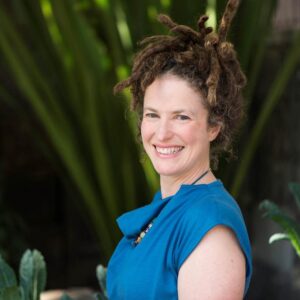 But sure enough, we are walking all over a resource that can achieve these three goals. Dr Samantha Grover leads the Soil-Atmosphere-Anthroposphere Lab at RMIT University, exploring the connections between soils, climate change and people. It all comes down to carbon storage.

Carbon compounds regulate the Earth’s temperature, make up our food, and provide energy. Most carbon on Earth is stored in rocks and sediments, and the rest is found in the ocean, atmosphere, and in living organisms. Carbon moves from one form to the other in a number of ways as part of the carbon cycle.

Human activities have greatly perturbed this cycle. Our activity releases significant quantities of carbon dioxide into the atmosphere. As a greenhouse gas, the more carbon dioxide emitted, the warmer our planet becomes.

Partly mitigating these impacts, plants recover 30% of atmospheric carbon via photosynthesis. Using energy from the Sun, they combine carbon dioxide with water to form sugar and oxygen. When the chemical reaction is reversed, carbon returns to the atmosphere – either by cellular respiration in plants and animals, or the burning of coal, wood, or gasoline. One way of preventing carbon dioxide from returning to the atmosphere is keeping it sequestered in the ground. In fact, there is two-to-three times more carbon in soil than in the atmosphere.

When plants die, critters in the soil (microbes, fungi and earthworms) decompose them into organic matter: carbon, water, nitrogen and phosphorus. When soils are healthy, they maintain a diverse community of organisms that help control insect pests, weeds and plant disease, form beneficial symbiotic associations with plant roots (e.g. to help plants acquire nitrogen and other nutrients), recycle essential plant nutrients by returning those from dead plants to the soil for new ones, and improve soil structure to support plant growth.

Healthy living soils are therefore the foundation of food systems – they can support crop growth.

At the 2015 United Nations Climate Change Conference in Paris, the “4 per 1000” international initiative was launched to demonstrate the crucial role of agricultural soils in ensuring food security and stabilising climate change. Increasing carbon storage by 0.4% per year in the top 30-40 cm of soil, would significantly reduce the carbon dioxide concentration in the atmosphere. Living organisms in the soil would transform dead plants into rich organic material for better plant growth.

One type of soil rich in organic matter, particularly carbon, is peat, formed in cold, anaerobic environments. Samantha met peat following a chemistry and political science degree. She didn’t want to constantly work in a lab, nor did she want an office job. She discovered soil chemistry – the in between – and spent a ‘glorious Honours and PhD’ in the Australian Alpine peatlands.

Peatland ecosystems provide safe, long term carbon storage, as well as water and biodiversity. Due to low evaporation levels, there is a large amount of water in the Australian Alpine peatlands which is used for hydroelectric power. They also provide a habitat for fauna, and Samantha loves listening to the frequent chorus of frog songs.

Bringing chemistry and physics together, Samantha observes the fluctuations of water and carbon as they move through the wetlands. Along with a team (including her son), she set up a flux tower in the Australian Alpine peatlands that has been collecting data ten times every second since it was built in 2017. The data obtained essentially provides a record of the “ecosystem’s breathing”, showing that it continues to form peat and sequesters 292 g of carbon per square metre every year.

‘Now that is an ecosystem worth conserving – it’s doing some really important work for us!’ says Samantha.

What can be done to achieve the 4 per 1000 goal to conserve ecosystems and trap carbon in soil? It can be as simple as subtle changes to farming practice: decreasing deforestation and encouraging ecological farming practices (e.g. avoiding leaving soil bare to limit carbon loss, restoring crops and forests, planting legumes that can fix nitrogen in soil, and nourish soil with manure.)

Samantha works with the Warrenbayne Farm Collective, who have adopted regenerative agricultural practices in their farming of sheep. After 18 months of being more conscious of livestock numbers, the way sheep are managed, and how they move around the land, Samantha is starting to see positive results in the soil carbon storage.

To encourage better practices by local farms, Samantha wants to formally recognise those who are doing their bit. Groceries are proudly labelled as organic, fair trade, or of a particular health rating. Samantha designed a “soil carbon” logo that she hopes will one day be displayed on products in supermarkets in recognition of good, regenerative agricultural practices.

By sequestering soil carbon, we can partly mitigate carbon emissions with numerous additional benefits. Samantha applies the physics, chemistry and biology of soil systems to solve the socio-environmental problems of climate change, food security, and restoring habitats for biodiversity. This article follows a presentation to the Royal Society of Victoria and Soil Science Australia by Dr Samantha Grover on 12th November, titled Soil Carbon: climate solutions right under our feet.
Written by Catriona Nguyen-Robertson