This article follows a lecture presented to the Royal Society of Victoria by Dr Drew Berry titled “Molecular Machines: Creating Flesh and Blood” on Thursday, 25th of October 2018. 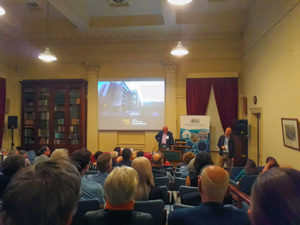 According to Dr Drew Berry, the public has “a huge appetite for science”, but scientific research is often “buried in language” filled with jargon, making it difficult for the lay audience to comprehend the complexities of cell biology. Dr Berry rose to this challenge of accessibility by combining science with art and animation to reveal the microscopic processes that occur inside our bodies.

As a high school student, Dr Berry “watched too much television” and loved science documentaries. After hearing about Calypso, a former British Royal Navy minesweeper that was converted into a research vessel by Jacques-Yves Cousteau for diving, filming and oceanographic research, Dr Berry wanted to travel around the world as a marine biologist. He quickly signed up to be a rescue diver and began studying marine biology at the University of Melbourne, where he was introduced to cell biology. There, Professor Jeremy Pickett-Heaps showed him cells under the microscope that looked like liquid gold along with videos of how the individual cells interact and move, and he became fascinated by them. 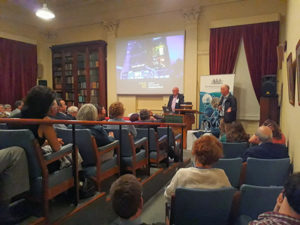 At the same time as being “surprised and inspired by microscopy,” Dr Berry was fascinated by the development of technology. He wrote his PhD thesis on the Amiga 500 in 1987, a computer that was ahead of its time back then, especially in terms of its graphics – vital for someone who has always played video games for the graphics rather than the gameplay! Alongside his studies, he created animations of human cells for children’s education purposes.

Dr Berry later switched careers to advertising, where he learned to use Photoshop, and in 1995 he combined his hobby in graphic design with cell biology to begin work as a biomedical animator at the Walter and Eliza Hall Institute (WEHI). In this role, he combs scientific literature and weaves it into a story with comprehensible language and visuals.

As an animator, most of Dr Berry’s days are spent reading scientific literature and going on long walks to think about what he reads while his computer runs tasks. There is a great deal of data on cellular processes, however the full story is often scattered among multiple studies and papers (i.e. all the details of one machine complex may be comprised of multiple proteins that work together, and each is described individually). Dr Berry therefore has to piece the jigsaw puzzle together to show the big picture while keeping the smaller details accurate. He also has to make artistic choices that may not always reflect the science of what’s going on. Colour is not relevant at the cellular and molecular levels; but he uses it in his animations to evoke moods and emotions, allowing him to better engage his audiences and also make it easier to distinguish between different components and processes of a cell.

Cell division and DNA replication are complex processes that involve multiple proteins to form cellular machinery. DNA exists as a double helix structure composed of two complementary strands (i.e. the two strands match and the sequence of one determines the other). During replication, the helix structure is unzipped and unwound so that each individual strand serves as a template for the production of its counterpart. In this still from his animation of the “DNA Replisome,” multiple enzymes (proteins) come together, each with a different role: one unwinds the double helix (helicase), one builds the new strands (DNA polymerase), and another joins newly-made DNA fragments together (DNA ligase). To see how DNA is stored in cells and replicated, you can view his animation here: 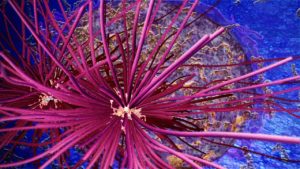 Once the cell has produced two identical replicas of its DNA, it can divide into two identical cells, the first step of which is prophase. During prophase, DNA content (chromatin) condenses, to become increasingly compact (making it visible under the microscope at this stage) and a structure called the mitotic spindle starts to form. The mitotic spindle is comprised of long microtubule proteins that form at opposite ends of cell to help separate the two identical copies of DNA so that it divides equally between the two new cells formed. Dr Berry has studied how proteins “step along” along the microtubules in great detail and is exploring their dynamics to determine how it works as a “signal broadcasting system”.

Several of Dr Berry’s recent projects include WEHI’s Illuminarium, a revolving LED-light installation spanning six-stories that displays images featuring the latest medical research at dusk and dawn, animating human/alien hybrid DNA for Keanu Reeves in the film The Day the Earth Stood Still, and an animated video of Bjork’s cells and tissues to accompany her song Hollow (a dream come true as someone who had a crush on her as a teenager!). His works have travelled the globe, having made appearances in the Guggenheim Museum and Centre Pompidou, and his animations depicting molecular processes such as DNA replication and DNA transcription, have toured many a school classroom and university lecture theatre as a popular learning tool.

Most of Dr Berry’s products are aimed at high school students, but his audiences now extend far beyond as he continues to undertake science outreach. His works have travelled to various museum exhibits and galleries. In 2014, he worked with a team to create the E.O. Wilson’s Life on Earth biology e-textbook, which can be downloaded for free. This interactive high school textbook has revolutionised students’ learning experience. It includes narratives and image libraries for students to zoom in, zoom out, and rotate for a more hands-on learning experience. His ultimate dream is to see students exploring cells with virtual reality and augmented reality in the classroom using their mobile phones. He believes that science should be accessible and that it should be shared, driving him to create these vibrant and informative animations that are now displayed around the world.