Join the celebrated Drew Berry, who will present his latest visualisation experiments in creating cinematic movies and real-time interactive 3D worlds to reveal the molecular engines that convert the food you eat into the chemical energy that powers your cells and tissues. 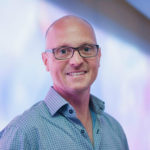 Dr Drew Berry is a biomedical animator who creates beautiful, accurate visualisations of the dramatic cellular and molecular action that is going on inside our bodies. He began his career as a cell biologist and is fluent navigating technical reports, research data and models from scientific journals. As an artist, he works as a translator, transforming abstract and complicated scientific concepts into vivid and meaningful visual journeys. Since 1995 he has been a biomedical animator at the Walter and Eliza Hall Institute of Medical Research, Australia. His animations have exhibited at venues such as the Guggenheim Museum, MoMA, the Royal Institute of Great Britain and the University of Geneva. In 2010, he received a MacArthur Fellowship “Genius Grant”.