This article follows a joint presentation on 16 January, 2020 by Associate Professor JJ Eldridge from the University of Auckland to the Royal Society of Victoria, in partnership with Queers in Science, timed to coincide with the 2020 Midsumma Festival.

Associate Professor JJ Eldridge has always been unique. Their brother is a hands-on person, their sister is an engineer, but they were always best at learning and sitting exams. JJ loved maths and science and watched Star Trek: The Next Generation and Doctor Who growing up. Going to the University of Cambridge to become an astrophysicist was the closest they could get to the stars. With a stellar career to date, undertaking postdoctoral research at the Institut d’Astrophysics de Paris, Queen’s University Belfast and the Institute of Astronomy in Cambridge, JJ is now a theoretical astrophysicist at the University of Auckland. Throughout their journey, they have been a strong advocate of LGBTI+ inclusion both within their university and internationally. 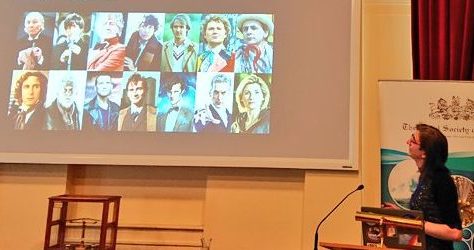 At the first RSV lecture held with Queers in Science to coincide with the 2020 Midsumma Festival, JJ first shared their personal story in breaking the gender binary. They are still discovering their nature and likens the unsettling process to The Doctor’s regenerations (in Doctor Who), quoting “it is painful to work out who you are”. Gender issues also have been more directly addressed in Star Trek, in which, among an androgynous species called the J’naii, it is cisgendered people who feel out of place. Perhaps that says something for what is to be found among the stars; JJ observes that “[people] are the most complicated thing in the Universe,” reflecting that, while they are themselves a non-binary individual, their research focuses on the evolution of binary stars. Almost all of the elements in the Universe were forged in the merging and exploding of ancient stars. Hydrogen and helium trace their origins back to the Big Bang and a couple of small elements can be attributed to cosmic rays – high-energy radiation from outside the Solar System. But the rest come from the stars (excluding man-made elements).

Elements are defined by the number of protons they contain in their nucleus. To create a new one, more protons need to be squeezed into an atom’s nucleus in a process called nuclear fusion. Stars first fuse hydrogen atoms into helium inside their core, which act as thermonuclear furnaces. Then helium atoms fuse to become beryllium, and so on.

Lower-mass main-sequence stars, like the Sun, accumulate helium in their core as a result of hydrogen fusion, but for most of their lives, the core is not hot enough to create larger elements.  Once all the hydrogen at the core of the star has been converted to helium, energy stops being generated by nuclear fusion. The core begins to contract due to its own gravity and the internal temperature rises, igniting a hydrogen envelope surrounding the inert core. With increased luminosity from the burning shell, the star becomes a red giant. Eventually, the contracting core reaches temperatures high enough to convert helium into carbon.

Once the core helium of a red giant is exhausted, an analogous process occurs, and the star starts to collapse once again. At this point, it has both helium and hydrogen shells which continue to burn. This puts the star onto the asymptotic giant branch, a second red-giant phase, and at its core are the elements carbon, nitrogen and oxygen – a result of helium fusion. Thus the elements key to DNA, proteins, lipids, and carbohydrates – the building blocks of life – are born out of dying, low-mass stars.

The core of massive stars that are 8-20 times the mass of the Sun will continue along this process of core burning followed by core contraction and shell burning, is repeated in a series of nuclear reactions producing successively heavier elements until iron is formed in the core. This is the end point for a star, as iron cannot be burned into heavier elements because that reaction would require energy (whereas up to this point, nuclear fusion has released energy). The star runs out of fuel and collapses. The point of death of a massive star or white dwarf is the basis of life for many other chemical elements. In a star’s last second of life, its core compacts tightly and then explodes with the energy of an octillion (1027) atomic bombs. Intense heat from this violent explosion catalyses nuclear reactions not previously possible in the core to give rise to more than half the elements on the periodic table.

When giant stars die in supernovae and their cores collapse, their protons and electrons essentially melt into each other to form neutrons. They become neutron stars – essentially the largest neutrons in the Universe. At this point, they are so dense that their core is merely the size of a city while having a mass 1.5 times that of the Sun.

Binary stars are two stars that orbit a common centre of mass, that is, they are gravitationally bound to each other. When two neutron stars orbit each other as binary stars, there is the rare occasion in which they merge. This literally shakes the Universe as the merging neutron stars send out gravitational waves and create heavy elements, such as gold. As JJ pointed out, you can thank the rare merger of neutron stars for your gold and silver jewellery.

Over billions of years, stars are born, age and finally die. As they evolve, they give rise to different chemical elements. Merging neutron stars give rise to gold. Exploding white dwarfs make the calcium in our bones. Dying massive stars release the iron that makes our blood red. Smaller dying stars and red giants produce the essential elements of life: carbon and oxygen. As someone who began their science journey immersed in science fiction, JJ has certainly learned that there is life among the stars and that we are all made of stardust.