Shining a Light on Patients

This article follows a presentation to the Royal Society of Victoria on 24 of October, 2019 titled “Nanomaterials: Exploiting Colour and Light” by Dr Rajesh Ramanathan, a Senior Lecturer and co-lead of the NanoBiotechnology Research Laboratory (NBRL) at RMIT University‘s School of Science.

‘For most of the problems we try to solve, nature has already done it for us’ – Dr Rajesh Ramanathan.

Winner of the 2019 Phillip Law Postdoctoral Award for Physical Sciences, Dr Rajesh Ramanathan shared his journey to incorporate elements of nature into the design of nanoparticles for a wide range of biomedical applications. By shining a light on patients and nanoparticles, he can reveal their glucose levels, repair their wounds, and image their tumours.

Whenever Ramanathan was sick as a child, he was interested in why. He constantly engaged with doctors to ask what was going on in his body and how his treatments worked. He also enjoyed reading Prey by Michael Crichton, a novel in which nanotechnology seemed merely science-fiction. Little did he know that he would one day be pioneering new nanotechnology in biomedicine. 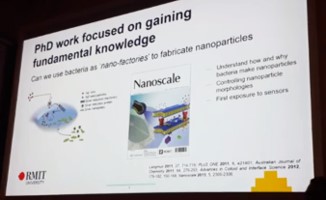 In an eco-friendly production method, Ramanathan makes use of bacteria to manufacture nanoparticles as “nanofactories.” Bacteria are currently widely used in biotechnology as factories to produce large numbers of proteins and DNA for clinical and research purposes, so he was able to manipulate them to instead churn out nanoparticles, the production of which is naturally a part of certain bacteria species’ mechanism for surviving high metal ion concentrations in their environment.

Ramanathan links his past research in sensing technologies as a postdoctoral fellow at the University of Massachusetts with his current research to develop nano-sensors. He is developing a non-invasive, sensitive glucose sensor for diabetics so that they no longer have to monitor their blood. The foundation of current glucose sensors are two chemical reactions testing for blood glucose levels: glucose is oxidised, producing hydrogen peroxide, which is then broken down into water by peroxidase, causing a visible colour change measured by the sensor. To avoid using blood and to combat the rapid degradation of peroxidase, Ramanathan mimicked its activity with a nanozyme (nano-enzyme) and found that it can detect glucose with a similar reaction using urine. He first used silver-based nanoparticles but these were saturated very quickly high glucose concentrations in urine in that they could not distinguish between medium and high glucose levels. To overcome this, he used copper instead of silver, which was sensitive enough but also oxidises easily, interfering with the glucose oxidation result. By dipping the copper nanoparticles in gold, silver and platinum, this overcame all hurdles to allow for a detectable colour change in the presence of glucose that can be easily measured by patients themselves. 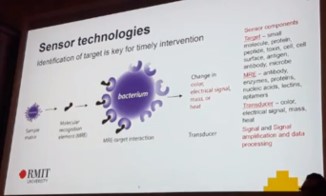 Ramanathan and his team also designed nanoparticles that use small, engineered single strands of DNA (ssDNA aptamers) to bind specific DNA targets from bacteria. The ssDNA aptamers are linked to nanozymes so that they undergo a reaction when the aptamer finds its target DNA that is visible as a colour change. 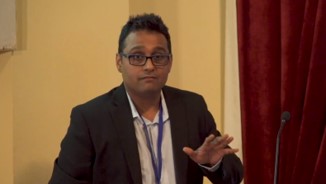 In face of the alarming rise of superbugs that are resistant to many antibiotics, we need better methods of detecting superbug infections and identifying ways to treat infection. One of the most common superbugs is Staphalococcus aureus (golden staph), which is usually harmless, but if it picks up genetic elements that confer antibiotic resistance and get inside the blood, it can cause severe infection. Similar to our ability to detect distinct smells by recognising combinations of odour molecules, Ramanathan created a ‘chemical nose’ for detecting these superbugs. He generated a unique colourmetric fingerprint for the DNA of each strain of S.aureus as well as different genetic elements that encode antibiotic resistance. The ssDNA-nanozyme nanoparticles can detect the presence of a particular bacterial strain in an infection and determine which antibiotics can be used to treat it based on the combinations of DNA sequences it has. 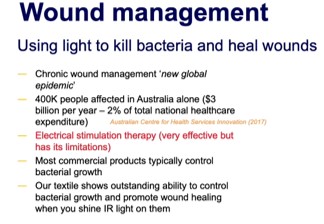 Another application for Ramanathan’s nanotechnology is in wound management. He designed nanozymes that break down hydrogen peroxide into hydroxyl radicals in the presence of light. Hydroxyl radicals are produced by the immune system in response to bacteria, and therefore this is another example of mimicking nature. The nanoparticles also deliver pain-free electric stimulation to accelerate wound healing, which has been used previously by sticking electrodes in the wound in a painful process that could occasionally do more harm than good. By embedding these nanoparticles into fabric, Ramanathan designed a bandage that acts both as an antibiotic and promoter of healing when activated by infrared light. 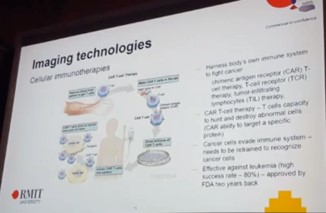 Lastly, in a project that has been in the making since 2012, Ramanathan has designed nanoparticles that can be combined with cancer immunotherapies to image tumours. An exciting cancer immunotherapy, for which Australia is at the forefront of developing and using in clinics, is CAR-T cell therapy. Specialised immune cells called T cells are taken from the patient and manipulated so that they can efficiently target and kill tumour cells when re-delivered to the patient. Ramanathan linked radioactive tracers to the CAR-T cells so that when they migrate to the site of the tumour 24-48 hours after delivery, they can be used to image the tumour with a combination of MRI and PET scanning techniques. This will be an available product within the next month, so stayed tuned to see it in the clinic.

Ramanathan combines nanoparticles with light to achieve a wide range of biomedical applications. From sensing chemicals and bacteria, to healing wounds and imaging patients, his nanotechnology is at the forefront of biomedical science and its potential is endless.