Darkness Visible Down Under Decades of research have led astronomers to a staggering conclusion, that there exists a new, invisible type of mass that outweighs everything we can see five times over. Join Associate Professor Alan Duffy, who will explain how we know so much about the properties of a particle we have yet to discover, and how Australia is playing a leading role in uncovering the nature of this mysterious dark matter with SABRE, the world’s first dark matter detector at Victoria’s Stawell gold mine. 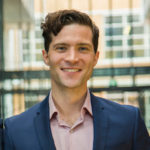 Associate Professor Alan Duffy is an astrophysicist creating universes on supercomputers to understand how galaxies form and to probe the nature of dark matter. He often gets to explain this work to as wide an audience as possible on TV, radio and public events.

Alan is a member of SABRE, the world’s first dark matter detector in the Southern Hemisphere, based at the bottom of a gold mine at the Stawell Underground Physics Laboratory in Victoria, Australia.

As a member of two leading surveys on the next-generation Australia Square Kilometre Array Pathfinder telescope he creates local universe simulations that can be used to test our galaxy formation and dark matter theories when compared with observations from the WALLABY and DINGO surveys.