We enjoyed another remarkable, whirlwind tour of the sciences at the Society last night, with these six outstanding early-career scientists presenting work that pushes the boundaries of knowledge across incredibly diverse fields of research. The applicant pool grew this year to 60 final year PhDs from across Victorian research institutions, meaning our six finalists had already distinguished themselves simply by being selected to present to us on the evening.

Our six finalists were selected on the quality of their written applications and their scientific work. On the big night, the daunting task for a finalist is to somehow distil the methods and significance of their complex work to a general audience of scientists and science enthusiasts in a clear, concise, accessible and engaging presentation of no more than 10 minutes. Ten short minutes to present three to four years of intense scientific inquiry to a general audience, while remaining true to the science, takes many hours of careful thought and diligent preparation, and all of our finalists demonstrated just how much they’d invested in transmitting their research effectively. We convey our sincere thanks to all finalists for their commendable efforts, particularly to those facing the challenging final months of their doctoral studies.

Ultimately, our competition is a competition, and must acknowledge those who draw ahead of the pack on the grounds of effective communication, robust science, the capacity to answer some tough questions through audience discussion and the significance of their research. The results are listed below in each category, with warm congratulations to all of our winners and runners-up.

Global energy demands are such that we need to increase our energy production by 30% by 2040. To keep up with the demand, we need to look to renewable energy sources.

A large area of the Australian continent is under-laid by hot rocks (greater than 200°C), and if we exploit even 1% of it to create geothermal energy, then Australia would have over 25,000 years’ worth of energy supply.

Current deep geothermal systems use eight Olympic size swimming pools’ worth of water in one go, so Avanthi is devising a method of using liquefied carbon dioxide instead. This would remove CO2 from the atmosphere as a greenhouse gas as well as inducing multiple fractures when injected into the ground to collect heat from the rocks on its way back up.

Silicon transistors are the base of our technological devices, but we are reaching the limits of the computing power we can generate with it. Shruti is investigating alternatives that can keep up with our demand for digital data and increasingly fast, powerful, and smart technology.

Current transistors waste energy as the electrical current within is scattered, and she is designing transistors that force the current to travel in a straight line rather than be diverted.

A vacuum would solve the problem, but would be costly and bulky to manufacture. She is therefore reducing the distance the current has to travel by making transistors with tungsten, gold and platinum. She is also developing “memrisistors”, which saves data in the form of resistance states based on how our human brains would do it. Her idea is to have less leakage in terms of current, high storage capacity for data, and faster speeds.

First Place: Emily Roycroft, School of BioSciences, The University of Melbourne & Museums Victoria
“Phylogenomics, adaptation and extinction in the evolution of native rodents.”

Australia has the worst rate of mammal extinctions worldwide. 30 Australian mammals have become extinct since 1788 and all that remains of them are in museum collections.

With new technologies that allow us to obtain and sequence DNA from these old specimens, Emily is investigating the insights that genomes give us to past and present biodiversity within native Australian rodent species. She collected 300 specimens and sequenced their DNA to create a phylogenetic tree (determining their relationships) and saw that there was a link between larger size and extinction – possibly due to predation by introduced species.

She also compared the genetic diversity of closely related species to determine that territorial ranges and genetic diversity have been more dramatically reduced in just the past 200 years than earlier realised, meaning some remnant species require a dramatic rethink of management status from “threatened” to “endangered.”

One third of the food produced in the world goes to waste at a cost of approximately $940 billion USD. Microbial contamination of food leading to food spoilage is a large contributor to this waste.

Elvina is producing a natural bio-preservative using “good bacteria”. Lactobacillus plantarum is a bacterium that produces antimicrobial peptides, which can hinder the growth of bacteria that spoil food.

She has developed a way of “starving” the bacteria to maintain their antimicrobial properties under the harsh conditions of food production and storage (i.e. being stored for weeks at different temperatures). These starved bacteria can kill spoilage and pathogenic bacteria species when challenged, and she therefore hopes to use this work to improve food safety and reduce food waste.

First Place: Annie Cox, The Ritchie Centre, Department of Obstetrics and Gynaecology, Monash University
“Protecting women with preeclampsia and their babies: Could sulforaphane, a broccoli sprout extract, be the answer?”

Pre-eclampsia can cause circulation problems during pregnancy, affecting the blood supply to the placenta and limiting the baby’s supply of nutrients and oxygen. Some of the effects of pre-eclampsia are inflammation, high blood pressure, oxidative stress, blood vessel damage, and hypoxia (low oxygen levels). Typically the high blood pressure is addressed while other side effects are not, and the placenta is removed and the baby taken out early.

Given that oxidative stress is one of the drivers of tissue damage in pre-eclampsia, Annie wondered whether anti-oxidants might be an answer. She has tested the ability of sulforaphane, an anti-oxidant found in broccoli, to restore placental blood vessel health and function in vitro, and is now investigating it as a treatment and prophylactic in protecting pregnant women and their babies.

Rachel worked with patients and began to notice a pattern: that the voices are often a replay of things people have heard before in their lives. She hypothesised that these are a type of trauma memory intrusion as seen with Post Traumatic Stress Disorder (PTSD).

Rachel began assessing the association between traumatic memory intrusions and the occurrence of hearing voices and found that they were frequently linked. Now she is pioneering the use of PTSD trauma therapies for auditory hallucinations, resulting in a reduction of voices heard by many patients.

Thanks also to the many friends, family members and colleagues who came out on the night to support our finalists, including some familiar faces from our competition in earlier years! Some photos from the evening are provided below – clicking on these should open the larger images for you. 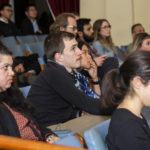 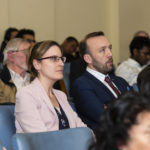 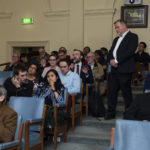 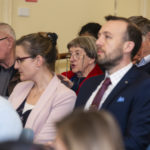 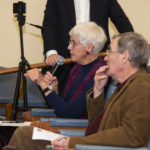 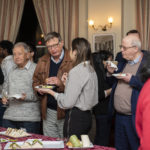 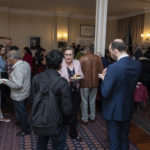 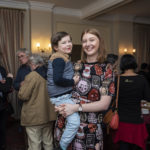 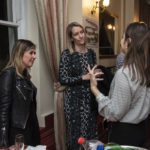 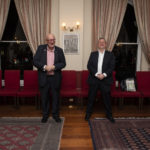 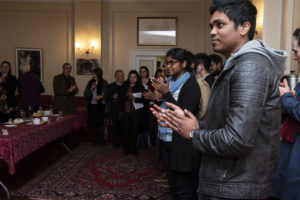 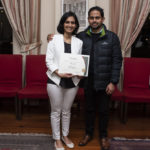 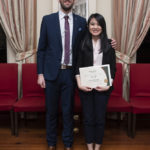 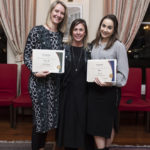 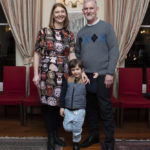