Developing Science-Backed Investment Models to Save the Platypus 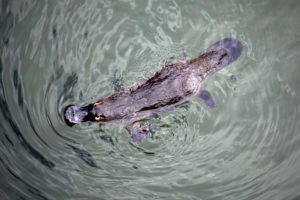 Victoria’s science society is developing a series of implementable ideas to save the platypus, formally declared a vulnerable species by the Victorian Government on the recommendation of its Scientific Advisory Council in January 2021.

“The earliest fossil records of the modern platypus date back at least 100,000 years, and its monotreme ancestors were present on the supercontinent of Gondwana hundreds of millions of years ago,” says RSV’s CEO, Mike Flattley. “Yet the twin threats of anthropogenic climate change and ecological collapse means the platypus may not be living in the wild by the end of this century.”

RSV President Rob Gell says “we’ve already lost the platypus from the wild in South Australia, and it is entirely in our hands whether we make the necessary investments to protect and regenerate platypus habitats here in Victoria.”

“The science is clear, and we know we need to act. We just need to establish the ways and means to do it.”

The Victorian Government’s Scientific Advisory Council, which recommended the platypus be listed as vulnerable in November 2020, identified the primary threats to this declining species as the destruction of habitat, the reduction in surface water and flows due to drought, and altered flow regimes and water extraction for domestic, industrial and agricultural purposes. Predation by natural enemies like goannas and snakes has always been a feature of platypus life, but introduced species such as the red fox, cats and dogs have increased pressure on the iconic animal.

According to the Council, the unreliability of surface flows and subsequent degradation of aquatic systems is predicted to increase under future climate change scenarios and the impacts of a growing human population.

Recognising the scarcity of public funding to drive recovery, the RSV is establishing a Natural Capital Financing Working Group to focus on the urgent need to stimulate private sector investments that protect, preserve and regenerate local biodiversity in the face of threats from climate change and habitat loss. The working group will consist of a broad cross section of stakeholders including scientists, local government, financial institutions and corporations.

Ideas that will be developed by the working group include:

A discussion paper has been developed and released by the Society for consideration by Group members.

The platypus has deep links to the history of the Royal Society of Victoria. In the 19th century, the RSV brokered the scientific expertise to develop Melbourne’s water supplies, storm water and sewerage systems, informing standards for the rollout of municipal infrastructure across the state which, ironically, has had a profound impact on the platypus’ natural habitat.

“A world-class sewerage system and a reliable source of healthy drinking water remain a big win, but the transformation of Melbourne’s natural waterways into underground and hard-surfaced drains to speed rainwater directly to Port Phillip Bay didn’t consider the value of permeable creek beds and banks for charging our soils and water table,” claims Mr Flattley. “It certainly didn’t account for sustaining biodiversity within our urban waterways.”

“These natural systems can do so much for us; reed beds and aquatic plants can help sequester carbon, clean the water and mitigate erosion. Natural waterways charge adjoining soils with water to support plants and animals that, in turn, contribute to pollination, soil health and the control of pest species.”

Mr Gell says “the plight of the platypus is of national and international concern, and the threat to its existence is not at some distant date in the future. It is today. It is possible that at any time in the next few years we can expect a spring flash flood followed by a string of 45°C+ days. In this environment, the platypus will not breed.”

“The eyes of the world will be on Victoria in confronting the decline of an iconic Australian species. We are known internationally for our science. We must be known for using our science to protect our biodiversity.”