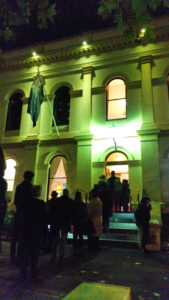 What do we know about trees?

They provide oxygen, shelter, and filtered water, yet, as Dr Renee Beale (RSV’s Victorian Science Week Lead) says, we treat them as only ‘one rung higher on the ladder than inanimate objects.’ The inaugural Science Gossip event was held at the Royal Society of Victoria on the 15th of May. The event planted artists, philosophers, the public and scientists in common ground to discuss and unravel the secrets of forest communication, complexities and communities. Renee invited RSV members and guests to ‘really see trees.’

What do we say about plants, and what do they say about us?

Associate Professor Monica Gagliano was the keynote speaker of the night. She began her story over a millennium ago with Aristotle, who categorised souls into three hierarchical groups: 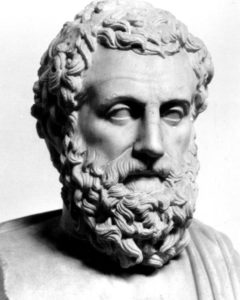 This effectively objectified plants, but today we know a lot more about them – and we know that they are indeed aware of their surroundings. They can see, smell, touch, and hear in their own way and usually respond to change by changing their growth rate, or direction of growth. Plants often turn towards, or grow towards the sun (or other light source) in a process called phototropism. They can also smell approaching insects and volatile signals released by neighbouring plants. Some plants, such as the Venus flytrap, also feel, with leaves lined with tiny hairs that act as mechanoreceptors to sense contact by its prey, causing the leaves to snap shut.

Plants can also perceive sounds. Plant bioacoustics is a newly-emerged field of plant communication, and one that Monica is heavily engaged in. An orchestral symphony will have little effect on plants, however there are certain sounds that do trigger plant responses. Monica spoke about studies that demonstrated plants responding to their environments by “hearing”. Water in the soil is constantly moving, and the sound of water gives plants an idea of the direction they should grow their roots to ensure they have a return on their investment. Another study from Tel Aviv University revealed that primroses produce more nectar at the sound of honeybees, their pollinators, approaching. Conversely, a team at the Swiss Federal Institute of Technology in Zurich found that recordings of caterpillar munching sounds caused plants to produce chemical defences in their leaves to ward off attackers. Monica’s own research revealed that plants themselves can produce their own sounds at the lower end of the audible range and ultrasonic sounds.

While plants might not have eyes, ears and noses, they still have their own senses and communicate in difference ways based on what they’ve learned to be advantageous.

At the conclusion of Monica’s keynote, audience members were divided into groups for interactive activities to explore a fusion of arts and science throughout the Society’s building. Anna Madeleine, an artist working in mixed media and animation at the Australian National University School of Art and Design set up an augmented reality exhibition in the Burke & Wills Room. She scattered wooden circles, autumn leaves, and eucalypt leaves across tables for the audience to interact with using iPads. 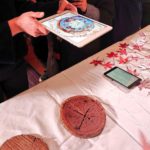 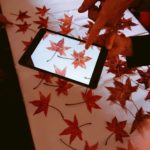 Depending on the species and climate, the number of rings in a tree trunk is indicative of how old it is. Not only do they grow one ring larger every year, they can also record information about climate over time. Anna designed animations that tell stories about life the trees would have witnessed in their years.

The smallest woodcut had one animation of several butterflies passing by, and as the woodcuts increased in size, they had more and more animations stacked on top (lightning storms, wind, etc.). Anna also designed leaves that are linked to the Bureau of Meteorology so that they display the time of sunrise and sunset, and the temperature of Australian capital cities, in a harmonious blend of nature and technology.

Dr Sapphire McMullan-Fisher held a “fun-gi” Q&A session in the Cudmore Library. Surrounded by pictures of fungi, edible mushrooms, and fictional and factual books on the theme of mushrooms, the audience was invited to ask fungi-related questions.

They learned that fungi can be ‘used to fix up the messes that humans have made’ by absorbing and breaking down heavy metals and are also part of a wider community with plants – they live among plant roots to contribute decomposed nutrients and receive sugars in return. Sapphire highlighted the importance of fungi to plant ecosystems, despite the fact that they are often overlooked.

The audience delved into the philosophical with Adjunct Professor Freya Mathews in the Von Mueller Room. She posed the question ‘why are we plant blind?’ The scientific method calls for objectivity, and when we study plants, we are merely observers and led to believe that nature is mindless. Objectivity leads us to objectify. Now, science is revealing that nature is full of minds – belonging to both animals and plants. Freya encourages us to look at nature ‘not as an outsider looking on’, but to care of the land so that we can watch it thrive as it receives the nurture from us that it deserves.

The evening was rounded off by acoustic ecologist, musician and sound artist Vicki Hallett. Vicki often performs around animals and in nature – she even jammed along with a snorting hippopotamus who was passing by as she stood on an isolated rock in South Africa. By placing microphones in the air, on the ground, and on the roots and branches of trees, she develops recordings that unveil the sounds of nature. She riffed with her clarinet, bass clarinet and a Tibetan singing bowl over the top of these sounds to create a beautiful, meditative piece. The resonating melody hung high in the air as Science Gossip closed for the night, and everyone left, with a few more stories about trees to share.