Patrick Baker has spent much of his life outdoors, from the landscapes of South Africa to Pennsylvania as he moved around the world. He had planned to become a doctor like his father and the three generations before him, but after spending time planting vegetation and helping Oxfam build wells in the Sahara Desert with the Peace Corps, he knew he did not want to work indoors. He instead joined Yale’s graduate program in forestry and spent a summer in Sri Lanka. He subsequently spent years working in forests in Thailand with Harvard University, followed by Hawaii, before moving to Melbourne in 2004.

Australia has warmed by just over 1 °C since the early 20th century, with most of the warming occurring in the last 50 years. This warming has seen an increase in the frequency of extreme heat events and severity of drought conditions. Patrick also warns that oceans are also steadily heating, which will contribute to future warming of the planet in decades to come – even if we stop all emissions today.

Climate change is relentless, and it is impacting forests. Patrick, now a Professor of Silviculture and Forest Ecology at the University of Melbourne, is researching how better forest management practices can ensure our forests are resilient to global warming and extreme weather events.

We often think of counting tree rings to determine the age of a tree, but their colour and width can also provide snapshots of past climate conditions, dating back centuries. Drought variability can be determined by looking for thinner rings as trees hardly grow if they cannot access water. Trees in the bush of Southeast Australia appear to experience cycles of drier and wetter periods, with the worst drought in modern history being back in the early 1500s. But Patrick warns that future droughts will inevitably be worse.

As well as climate itself being a disturbance to the landscape (e.g. in the form of drought), it also drives additional disturbances such as fire. Fire scarring of trees reveals past fire regimes, and while bushfires have occurred in the past, they were not as widespread, nor were they hot enough to put charcoal into the landscape. The charcoal from more recent intense, catastrophic fires is now evident in tree rings and trees that had once been resilient are now being killed. This is having a flow-on effect for the native animal populations whose habitats are being decimated. Their populations are decreasing and retreating to increasingly limited areas with suitable climates.

Patrick is looking into ways that forest management can help. He compared forest areas with different tree coverage and found that it was the areas with lower tree density that yielded larger, healthier trees, able to better survive in the face of limited water availability in the Millennium drought (2003-2009). When packed closely together, trees have to share resources and there is less room for their roots to grow to access water sources deep underground.

Tree age and size also influences resilience to bushfires. A recent study revealed that older Mountain Ash trees have a reduced risk of losing their canopy in fires, while those trees between the ages of 7-36 were at the highest risk of scorching and their canopies being consumed by flames. Similarly, wider trees tend to fare better while trees thinner than 5 cm in diameter will likely die, no matter the intensity of the fire. Patrick advises that we need to be protecting our trees while they grow and foster their growth to get to a “fire safe” size faster – and thinning tree density will assist this.

Interestingly, tree species differ in their susceptibility to fire. Studying a number of eucalypts and acacias, Patrick’s team has found that Eucalyptus obliqua essentially cannot be killed by fire once its diameter is greater than 40 cm, while other species that are more susceptible to fire have to be larger to survive. Shifting to more fire-resistant species to act as a buffer will help fire-proof our forests by slowing down the spread of fires.

As someone at the intersection of forestry and silviculture, Patrick uses natural disturbances as a guide when thinking about forest management. For example, the 2009 bushfires reduced canopy cover in Eastern Australian forests, as though the trees had been cleared. When trees are cleared and harvested, some trees are left untouched as they house animals or might have greater value later – and this means that trees left behind have more space to grow and hence grow faster. To ‘spread risk across the landscape’, Patrick believes we should shift to unevenly aged forests rather than completely clearing large sections when cultivating trees by mimicking the impact of natural fires. That way not all our eggs are in one basket when threats come along. 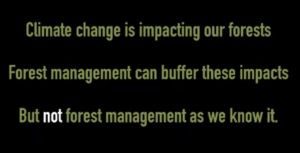 Climate events are shaping our forests, and with better forest management, we can make them more resilient. By carefully considering which types of trees are planted where, they will be better able to persist under the onslaught of climate-driven disturbance. One of Patrick’s favourite trees is Xyila xylocarpa, a beautiful red wood from Southeast Asia, after which he named one of his daughters, which is fitting, as she is a “tough nut”. It’s important that we give trees in the Australian bush their best chance to be tough nuts too.

This article was prepared by Catriona Nguyen-Robertson and follows a presentation to the Royal Society of Victoria on 25 March 2021 titled “Changing forests in a changing climate: what might the future hold?” delivered by Professor Patrick Baker (University of Melbourne).