The following article is a meme. It follows a presentation to the Royal Society of Victoria and the Australian Skeptics on 11 October, 2018 by Dr Susan Blackmore, a Visiting Professor at the University of Plymouth, whose ideas and story are to be shared with you and spread to other people, should you choose to pass them on.

Please note that some examples used for clarity and food for thought are focused on Christianity – not for any reason other than this is the religion most familiar to the author.

In the 1970s, while a student of psychology and physiology at Oxford University, Dr Susan Blackmore experienced a profound “out-of-body experience.” Afterwards, she sought a deeper understanding and completed a Doctor of Philosophy in parapsychology, analyzing reported incidents of clairvoyance, telepathy, astral travelling and so forth – all a part of what has become a lifelong engagement with the ‘mystery of consciousness.’ Through her studies, Blackmore formed a view that personal experiences of the paranormal were a byproduct of abnormal brain functioning. Freshly bestowed with a doctorate in ‘psychic powers,’ she was worried “there was no way [she] was going to get a normal job…or any job.” However, she broadened her research interests to take in evolutionary theory, mimetics, and studies in consciousness to become a freelance writer and lecturer, tackling subjects that would only become the focus of scientific enquiry in the late 1990s. After working with the School of Psychology at the University of Plymouth as a guest lecturer, she was granted a Visiting Professorship, and now dedicates her time to thinking, reading, and writing. Perhaps her ideas will expand your mind, encouraging you to do some thinking yourself.

Blackmore had chronic fatigue in 1995 and spent the year in bed, during which time she re-read Richard Dawkins’ book on evolution, The Selfish Gene. Once she recovered, she expanded on his ideas and the concept of Universal Darwinism to write The Meme Machine. Charles Darwin’s explanation of the Origin of Species in 1859 states that if there is variation among individuals and a struggle for life where some variants are more likely to survive than others, those at an advantage will be more likely pass their genes to offspring while other variants are weeded out, hence making evolution inevitable.  Dawkins’s idea is thus centred on genes being “selfish replicators”, not in that they are driven by motives, but in that they simply carry information that is designed to be replicated without concern for the consequences. 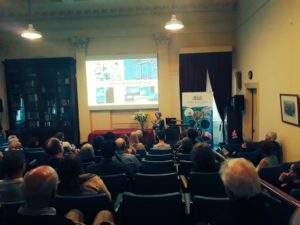 Dawkins proposes that genes are the first replicators – the original replicator being the initial molecule that managed to reproduce itself, gaining an advantage over other molecules. As replicating molecules became more complex, the replicators became instructions to create organisms. Once our human ancestors became capable of imitation, another replicator emerged; Dawkins coined the term ‘meme’ (shortened from mimeme – that which is imitated) to apply to this second replicator: an idea, behaviour, story, or other information that spreads from person to person through speech, writing, gestures, rituals and so forth. Dawkins and Blackmore theorise that memes undergo a process of evolution analogous to that of biological evolution and natural selection, in that they undergo variation and competition for space in our memories for the chance to be copied and spread. Because only some of the variants of information survive and are not forgotten, memes and in turn, human cultures, evolve. The Christian Bible for example contains four Gospels – Matthew, Mark, Luke, and John – all telling the life of Jesus Christ in different ways through a selection of teachings. Furthermore, only four Gospels were recognised and selected by the church, but other Gospels have existed, highlighting that some memes survive and are remembered while others fade. According to Blackmore, “we are the meme machines” because we create memes, people copy and vary them, and others choose to pass them on.

What makes a meme succeed? Some memes succeed because they are true, beautiful, or useful, while others are more viral in nature (e.g. chain letters and pyramid schemes), exploiting threats or promises to spread. Religion holds some of the most successful memes, having been passed down for centuries, and are the prime example of memes influencing human behaviour: Blackmore draws on Dawkins’ description: these are “viruses of the mind” that, for Blackmore, “cause people to expend huge amounts of time and money, and believe in things that are demonstrably false” based on promises that feed on existential fears (e.g. A Christian’s good behaviour is rewarded by going to heaven while sin condemns one to hell). Other memes, such as science, arts, sports, and communication systems, succeed because they are valuable to us, and some relatively harmless memes (with occasionally questionable value) can also spread like wildfire through the population such as jokes, rumours, popular songs, and games. Advancements in transportation and technology – memes themselves – have drastically improved the spread of memes around the world; many religions are much more widespread with the movement of people between countries, and the internet provides a platform to rapidly share music, ideas, knowledge, and so forth.

Blackmore proposes that there may be a third replicator emerging, created by the machines that we generated with the second. For a long time she has wondered whether there was a difference between traditional memes (the actions we copy, the languages we communicate with, etc.) and technological memes, or “tremes”, and the answer is becoming increasingly clear to her. To become a truly distinct replicator, digital information (text, images, software, etc.) needs to be copied, varied, and selected independently of humans, and this is now a reality. Since the time Blackmore first spoke about the idea of a third replicator (TED2008), technology has evolved rapidly as we provide machines with increasingly efficient processing power, to the point where humans aren’t required in the transfer of information. Amazon and Google, for example, have software that allows programs to filter, vary, and select advertisements tailored to their user’s history. Robots have even communicated with each other in their own language as demonstrated by Facebook’s artificial intelligence robots, which developed their own language before being switched off. These advancements indicate that, while “we provide all the stuff on which this operates” (i.e. the hardware and program codes), we’re no longer fully in control of the motives of artificial intelligence.

Blackmore’s intentions are not to enforce her beliefs onto us – but rather to stretch our minds to decide for ourselves whether or not we agree with the idea of a third, technological replicator. She invited us to consider how much of a “meme machine” we are: how much do we imitate and take from other people, and of that, and how much do we choose to pass on? “We’re bombarded with memes all day,” (stories, the news, other people’s habits, and of course, internet memes) some of which we adopt in our own behaviour or tell others about. I know my character and mannerisms are a compilation of various influences around me. I also listened to Blackmore’s presentation myself at the Royal Society of Victoria and decided to share her ideas in my own words to be read by you – and that is why this article is yet another meme.