The Future of Electronics

by Catriona Nguyen-Robertson
RSV Science Communications
(with the help of Errol Hunt, FLEET)

This article follows a presentation to the Royal Society of Victoria on 14th March, 2019 by colleagues from the ARC Centre for Future Low-Energy Electronics Technologies (FLEET), titled The Future of Electronics: Beyond the End of Moore’s Law.

Electronic devices have rapidly transformed the world. Computers, phones, and other silicon-based electronics have changed the way we live our lives. From only a few hundred computers in the 1950s, to 2.5 billion smartphones around the globe today, we’re constantly demanding more, increasingly advanced technology…but can we keep up with the demand?

When discussing the advancement of technology, it is impossible to avoid Moore’s Law, which predicts ever-smaller and ever-more efficient computer components.

The primary building blocks of electronic devices are transistors, which create the binary 0’s and 1’s that computers use to communicate. Moore’s Law predicted that the number of transistors in microchips would double every two years. So far, the law has held up.

The number of transistors inside computer circuits continues to increase as their size decreases so as to pack in more without resulting in a mobile phone the size of a book. Transistors are currently as small as 14 nanometers in size – only six times thicker than the DNA in your cells – and we’re reaching the limit of how small we can go.

Our uptake of newer technologies and electronics also comes at a cost: information and communications technology (ICT) consumes about 8% of global electricity, doubling every decade. A massive amount of energy is consumed in the thousands of factory-sized data centres that house “the cloud,” as well as computer systems for telecommunication and storage. Most of the energy consumed in data centres, computers and other devices is dissipated as heat rather than being used to power the device itself, meaning that much of it is wasted. ICT is now on par with the aviation industry for their contribution to global warming, and it’s time for a change. 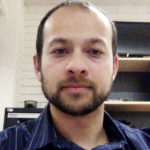 Dr Carlos Kuhn, a Postdoctoral Research Fellow at Swinburne University of Technology, explained how transistors work. Transistors are semiconductor devices that amplify or switch electronic signals (electric currents). A computer chip contains hundreds of millions, or even billions of transistors, each of which can be switched individually to one of two states: 0 or 1. There are millions and millions of binary calculations going on within such devices each second as the zeroes and ones are flipped, added, multiplied and divided at incredible speeds, all part of an integrated circuit. 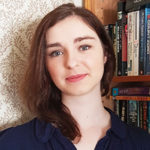 The biggest concern for Ms Rebecca Orrell-Trigg with the many millions of transistors that form the basis of ICT, is the ‘energy crunch’. She is a PhD student at the University of New South Wales and RMIT studying material science, developing new materials for future more-efficient computer chips.  While we’re reaching the physical limit of how small transistors can get, the most-important limiting factor to our computing power is not their size, but their energy usage.

A large amount of energy in transistors is used to perform calculations, but most of the energy is lost as heat (as people who have worked with a laptop on their legs can attest to). This energy is wasted due to the resistance that the electric current inside transistors meets as it flows irregularly through the material and scatters off impurities (it doesn’t travel in a predictable line).

In fact, the amount of heat released within integrated circuits is such that not all transistors can be working at any given moment – most are cooling down. Otherwise the entire system would overheat. It is this wasted energy that researchers are hoping to avoid as they develop new ways of advancing computing power. 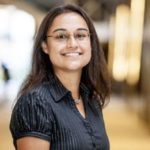 One solution is to design computer chips composed of different materials. For fifty years, silicon has been the common material used in chips, as it is abundant cheap, and easy to electronically ‘fine tune’. FLEET researchers, however, are moving beyond these silicon-based chips to find more efficient materials. Graphene, a 2D form of carbon, has great potential as it is a thin sheet of carbon atoms in which electricity can flow without resistance and energy loss. A/Professor Meera Parish is therefore exploring the conductive properties of these so-called ‘atomically-thin’ materials at Monash University.

As well as atomically-thin materials, A/Professor Parish investigates the relatively new physics field of topology. Topology is the mathematical study of shape, or of properties that are preserved through deforming an object: through twisting and stretching, but not tearing. For example, a coffee mug made of dough will still be topologically the same shape if it’s moulded into a donut shape (the handle becomes the hole while the rest of the mug becomes the donut itself).

All three scientists are working to take advantage of these new materials and gain insights to develop the next generation of low-energy electronics devices.

The remarkable advances in silicon-based CMOS computing technology (tracked by Moore’s Law since the 1960s) have come via due incremental, significant advances in technology. These three FLEET scientists are hoping to find an entirely new, ‘disruptive’ generation of technology, which would allow computing to continue to grow. As our demand and reliance on electronic devices continues, the only way to have sustainable growth – both in the environment and in economy – is to go low-energy.

Videos from our Presentation: