Frozen in Time: Titan’s clues to the beginning of life on Earth

This article follows a presentation by Dr Courtney Ennis to the Royal Society of Victoria on the evening of Thursday, 8 February 2018 titled The Secrets of Titan: Recreating the Cyanide Sky. What secrets does Titan hold? Dr Courtney Ennis, Research Fellow at La Trobe University and the Australian Synchrotron explores the solar system and beyond to discover the origins of life. Studying the chemistry of distant planets and moons can give insights into Earth’s chemistry of 3.6 billion years ago, and potentially reveal the conditions that gave rise to life at that time.

The roots of astrochemistry stem from the Miller-Urey Experiment in 1952, in which these two scientists attempted to recreate the atmosphere of primitive Earth, in order to see if it could produce molecules required for life. With only water, hydrogen, methane, and oxygen in their experimental atmosphere, and an electrical spark as ignition, amino acids and other building blocks of life were created. Since then, scientists such as Dr Ennis have refined a research model of observing data from spacecraft missions, using laboratory experiments to determine what molecules exist on distant planets and how they came to be, and creating theoretical models based on their observations and experiments combined.

Dr Ennis’s research journey began with NASA’s Cassini mission, when the world learned more than ever before about Saturn and its moons. As the Cassini spacecraft finally reached Saturn in 2004 (after leaving Earth 7 years prior), Dr Ennis was starting his PhD at the University of Western Australia. His work investigated methods of identifying what chemical compounds were found on icy bodies in the outer solar system, utilising particular wavelengths of light. After completing his PhD in 2009, he took up a post-doctoral position at the University of Hawai’i. Here he studied the effects of irradiating energy (like that from the sun) on planetary and interstellar ice, and how this can lead to the formation of complex molecules such as sugars and other precursors for the chemistry of life. He subsequently worked in positions at University College in London and the Australian Synchrotron, before joining La Trobe University in 2015. 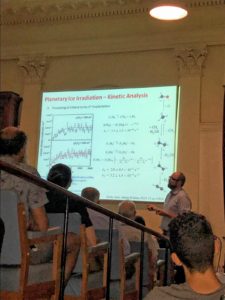 From the massive amount of data sent back to Earth from Cassini, Dr Ennis has been able to design experiments and generate models of the chemistry of Titan’s atmosphere. Comprised almost entirely of nitrogen, methane and hydrogen, the atmosphere of Saturn’s largest moon – when experimentally recreated here on Earth – contains enough ingredients for the production of complex molecules that are precursors to life. The Cassini mission also provided our first glimpse through the hazy atmosphere and down to the surface of Titan, which has revealed onion-like atmospheric layers of chemicals, large cryovolcanos spewing forth material, and frozen water ice on the surface. These findings together reveal a dynamic environment, containing constant chemical reactions that create a variety of compounds, much like on a primitive Earth.

After two decades of exploration the spacecraft ended its journey, expending most of its rocket propellant and spectacularly burning up in the upper atmosphere of Saturn. As NASA turned its attention to the ‘New Horizons’ mission to Pluto, so too did Dr Ennis. His work has taken him from the ice and aerosols of Titan, to the even colder ice-caps of Pluto and its moon Charon, and beyond the solar system to the icy objects of the Kuiper Belt.

The journey of Dr Ennis has been complementary to the journey of Cassini. Using the skills and insight learned throughout his journey, he has been able to use the data sent back to Earth by the Cassini space probe to develop experiments that aid our understanding of the chemistry of Titan. From telescopic observations, spacecraft missions, and experiments on Earth, he can piece together a picture of how life came to be on Earth 3.6 billion years ago.