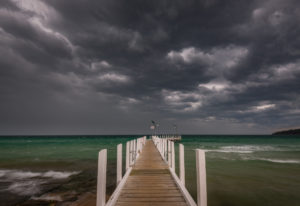 This article follows the 2021 Howitt Lecture, co-hosted by the Royal Society of Victoria and the Geological Society of Australia (Victoria Division), delivered by coastal geomorphologist Associate Professor David Kennedy (The University of Melbourne).

Sand is never lost from our beaches. It is simply shifted from one place to another, responding to the waves that wash over it. Beaches are dynamic systems in a constant state of flux as they interact with waves breaking on the shore. It might seem slightly counter intuitive that beaches have remained in place for tens of thousands of years, in more or less the same position, despite the fact that they are comprised of loose piles of sand. Yet the looseness of sand on a beach is key to its survival.

Sand is continually moved along or across shore over annual to decadal cycles to balance wave energy that impacts the coast. Coastal geomorphologist, Associate Professor David Kennedy, spends his time monitoring and studying coastal landforms. He endeavours to understand the dynamics of beaches, which is critical for sustainable environmental management of the coast.

Around the world, infrastructure is threatened by seas flooding land – and this is predicted to only increase due to climate change. Coupled by increasing populations and human activity at the coast, more and more homes and buildings are at risk. We have already seen disasters occur.

In 2016, huge waves and tides pummelled into the NSW coast in a storm, eroding about 50 metres of Collaroy Beach, where waterfront properties partially toppled into the sea. This was the beach where David learned to swim – but he never expected to see a swimming pool literally fall onto the beach. Yet this is the image that confronted us in the Sydney Morning Herald following a storm surge.

The sand dunes leading up to those waterfront houses fell away as the sand moved to counter the strength of the waves.

The active part of a beach can extend kilometres – as far offshore as where waves can stir up the seabed. What we walk on at the shore is merely the store of sand, ready to buffer waves and storms. Beaches adjust to the energy of high waves rolling in by transferring sand from above to below sea level – becoming shallower offshore as sand moves out to even out the gradient of the seabed. This process constantly occurs, and has for millennia, but problems arise when massive waves hit the shore and a great amount of sand moves in areas populated by people.

Understanding the dynamics of the change – the beach envelope – and its overlap with human infrastructure is fundamental for coastal management.

David studies impacts and movements of beaches in the past so that we know how to manage them moving into the future. Beaches along the NSW coast have been studied for decades as that is where Australian coastal geomorphologists and military personnel have traditionally lived and worked. Using data dating back to the 1970’s, David and other coastal geomorphologists have tracked the seasonal and decadal movement of sand on and off shore, as well as along the embayment. But we know much less about Victorian beaches.

Victorian beaches tend to differ as they are not completely sandy systems and are much rockier. One only has to travel down the Great Ocean Road to see the rocks and cliff faces that line the Victorian coast. According to David, our sandy beaches are ‘thin veneers covering the rock face that are almost live rivers of sand, hugging the coastline’. What sand we have merely comes from the eroding rock – the beach at the bottom of the Twelve Apostles, for example, is there thanks to the fact that they have eroded.

While we do not have long-term records in Victoria, David and his team developed the 2020 Eureka Award-winning Victorian Coastal Monitoring program. They used machine learning, with the help of citizen scientists, to assess drone footage to produce 3D models of shoreline change. Even with about 18 months of footage showing Apollo Bay, they could spot the hot spots of erosion and accretional areas.

Sand can also be redistributed by waves in a longshore direction. In Inverloch, major erosion of the beach front over the last ten years has seen sand shift from the open ocean coast in front of the surf club to the mouth of Anderson Inlet. The surf beach has receded around 50 metres while the inlet beach has gained 450 metres. While this threatens the infrastructure at the surf club, it has created a habitat for endangered beach nesting birds.

While the original model was that sand would move out to counter waves, more recent studies have suggested another model in which sand can instead built up onshore. Examining the age and evolution 90 Mile Beach, David and his colleagues have been able to age grains of sand (quartz) by determining when they were last exposed to light (i.e., when they were on the surface). They saw the old shoreline from the last interglacial period, as well as distinct ages showing that current dunes are on top of much older sand – the ‘beach is stepping back’.

Elsewhere in the world, some Pacific Islands are in strife because of these natural processes – despite the fact that they have weathered warmer climates and higher tides over thousands of years. The difference is human activity. Overall, the entire Kiribati archipelago remains stable, but some islands are contracting while others expand. One island, for example, is shifting lagoon-ward as the sand shifts away from the ocean. This is fine for a natural landform with inbuilt resilience, but the issue arises with static buildings (such as a hospital in this case) that are vulnerable to damage if the shoreline recedes too far. Sand itself might be a valuable resource to create an armoured section of shoreline so that people will not be forcibly removed from their homes.

Beaches are dynamic over long timeframes, and human timescales are so insignificant in comparison. Islands move and coastlines shift as they respond to waves and tides. Erosion during storms is a natural phenomenon and it may take months or years for a beach to return to its pre-storm state. But seawalls and other structures that we build will impact and inhibit natural recovery. When you retreat to the beach, the beach itself might be retreating too.