The Burke & Wills Memorial and the Melbourne Metro Rail Project 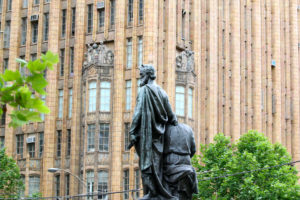 An update for those following the fate of the Burke & Wills Memorial during the Melbourne Metro Rail project; the Society’s governing Council supported the Burke & Wills Historical Society’s bid to have the memorial moved into the Golden Mile, on our land at the corner of Exhibition and Victoria, opposite the Exhibition gardens, and we presented our position to the Future Melbourne Committee last night. Our Society, its building and history is closely associated with the Victorian Exploring Expedition, and we field many visitors each week seeking a connection with and insights to the Burke & Wills story.

However, (and in the midst of great upheaval and protest around the new anti-camping measures the Council is implementing and the impact this will have on Melbourne’s homeless population) the Future Melbourne Committee supported their officers’ recommendations to have the statue removed to storage for eight years, after which time it will be reinstated in situ at City Square.

This is good news in terms of the protection and dire conservation work this damaged 1865 installation – the oldest work of public art in the City of Melbourne’s collection – requires following 150 years of multiple moves and repeated vandalism. While we would have loved to have welcomed the boys “home” to one of Melbourne’s most intact heritage precincts – a UNESCO World Heritage site – we accept the decision of the Committee and urge two things: one, that the explorers be reoriented to face north up Swanston Street, towards their passage to the Gulf of Carpenteria (rather than staring implacably west at a nearby branch of the Westpac bank), and; two, that a suitable installation acknowledging the care and compassion of the Yandruwandha people for the expedition’s sole survivor, John King, be developed as a token of enduring thanks from the people of Victoria.