Australian Views on Science and Scientists

A silver lining from the spread of COVID-19 is that discussion of science has taken over our newsfeeds. As we followed the evolving research on how COVID-19 spreads, the effectiveness of various prevention measures, and the development of vaccines, the Australian public became used to reading about research findings and seeing graphs and statistics tracking infection rates. This comes on the back of decades of sometimes confusing and misrepresented science regarding climate change.

So how do Australians regard science?

In 2021, the 3M State of Science Index told us that 91% of Australians were hopeful that 2021 would be a better year than 2020 because of science. Global scientific collaboration around COVID-19 vaccines rose to the challenge and have, indeed, helped reopen much of the world.

At the beginning of 2022, my colleagues and I at the Monash University’s Climate Change Communication Research Hub and the University of Auckland asked Australians for their views on science and found that approximately 60% of people think science and technology are making our lives healthier, easier, and more comfortable, and will bring more opportunities for the next generation.

There is a disconnect, however, when considering the personal, everyday relevance of science, with almost a third of people not seeing the importance of science for their daily lives. Perhaps science feels somewhat distant to us as it’s filtered through policy, or is seen as more relevant for policy-makers, or maybe as only relevant for significant events (such as getting vaccinated). This is a question that warrants further investigation.

Despite this, scientists remain among the most trusted professions. Trust in scientists varies depending on the field of science in question, with medical scientists currently slightly more trusted than climate scientists.

How much confidence, if any, do you have in each of the following to act in the best interests of the public? 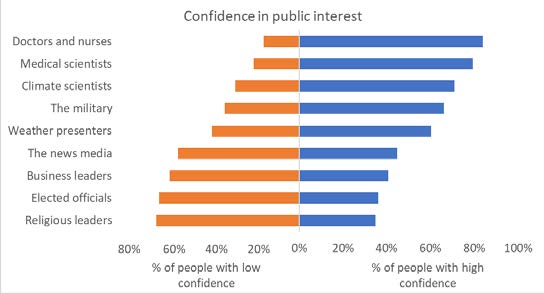 When asked specifically about trust regarding information within a specific field, however, the order of trust can shift markedly. When we asked who they trusted for information regarding climate science, Australians indicated that scientists were by far their most trusted source.

How much do you trust or distrust the following for information relating to climate change and its impacts? 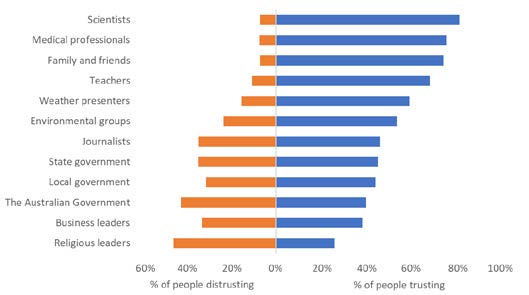 With ideology at the forefront, individuals tend to accept information that agrees with their ideological beliefs, ignoring evidence to the contrary.

Splitting the public in this way, whether across political, religious, or other beliefs, can significantly hamper the use of scientific evidence in decision-making on critical societal issues, placing many Australians at greater risk and delaying the implementation of effective policies.

This is not to say that we should not debate policy. Such debate is critical in determining the best course of action for society. These debates should, however, focus on evidence-based policy options and open analyses that support informed public decision-making.

Developing Science-Backed Investment Models to Save the Platypus
Greenhouse in Australia, 50 Years On