Imagine that you were able to read the night sky. Not just to determine north or south, but well enough to know when it will rain, when best to hunt and gather, to use it to encode stories that record history, and much more. This is what Indigenous Australians and Torres Strait Islanders have done for tens of thousands of years, and continue to pass on to each generation.

Dr Duane W. Hamacher is an astronomer and Senior ARC Discovery Early Career Research Fellow at the Monash Indigenous Studies Centre. His work seeks to understand how the first Australians developed and embedded scientific information into their knowledge systems. Working closely with Aboriginal and Torres Strait Islander elders, students, and knowledge custodians across Australia, he listens to their stories, songs, and traditions to learn about Indigenous astronomical and geological knowledge, and understand the connections between sky, land, and sea.

Many dismiss oral traditions as something easily corrupted over time. Dr Hamacher referenced the game of “Telephone” as the prime example of messages being distorted as they are passed from person to person. But the first peoples have long used Knowledge Systems that are passed down through orality (oral traditions, song and dance, craftsmanship, social practices, etc.) to ensure that the integrity of their stories and lessons are preserved. Orality is not unique to our continent – with the majority of human populations largely illiterate until relatively recently, many cultures have passed down information through elements of orality without distortion, however few cultures come close to the longevity of knowledge encoded through story seen here in Australia. 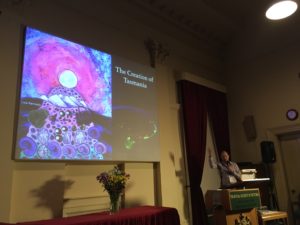 Indigenous Australians have inhabited this land for tens of thousands of years and Dr Hamacher shared with the audience living memories of events that have occurred over that time. He has been able to match Aboriginal stories of a fire-devil guarding craters in Henbury, Northern Territory to a meteoroid blazing across the Australian sky before crashing into the earth in that spot 4,700 years ago. Going even further back, recent studies show that Aboriginal traditions accurately record sea level changes over this time, including the “birth of the South Star” when sea levels rose to form Bass Strait, separating Tasmania from the mainland about 12,000 years ago. Dr Hamacher also heard many Aboriginal stories that feature eclipses – the male moon and female sun embracing – which only occur once every 300-400 years.

The journey of Dr Hamacher in exploring the antiquity of orality and the knowledge of the first Australians can seem an unlikely path. As a child growing up in a small town in Missouri, USA, Duane was obsessed with science. He always wanted to be either an astronomer or a palaeontologist, and regards himself as fortunate to have had an amazing teacher who pushed the students to learn, helping him realise his dream. First visiting Australia in 2003 for a semester abroad as part of his undergraduate studies in physics, he fell in love with the country. After graduating from The University of Missouri with a Bachelor of Science in 2004, he went on to complete a Masters in astrophysics at UNSW in 2006, before pursuing a PhD in Indigenous studies at Macquarie University, which was conferred in 2012. 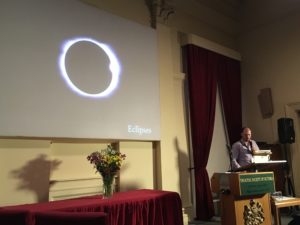 The leap from astrophysics to Indigenous studies allowed Dr Hamacher to appreciate the vast scope of scientific understanding embedded in Aboriginal and Torres Strait Islander knowledge, and connect the two different scientific languages. Millennia of observations, experiments, analysis and recording by the first Australians – all of which are components of the scientific method – have yielded intricate knowledge about the country they have lived in for so long.

One location that Dr Hamacher has visited is close to home; located in Melbourne’s southwest, the Aboriginal stone arrangement of Wurdi Youang is estimated to be around 11,000 years old – 6,000 years older than the iconic bluestone circle of Stonehenge in England. Similar to the manner in which Stonehenge is aligned with the rising sun of the summer solstice and setting sun on the winter solstice, the Wurdi Youang stones align to the setting sun at the equinoxes and solstices through the year.

The dates of the solstices and equinoxes signify the change in season, and have been used by peoples around the world to plan for the coming months. From communities in north-western New South Wales, Dr Hamacher learned what changes in seasons mean to the Ngemba, Kamilaroi and Euahlayi language groups who live there, and how they read the sky. These groups observe an emu, Dhinawan, formed by the dark spaces between the stars in the sky (referred to as ‘dark constellations’). In autumn, the Dhinawan appears to be running through the sky – the female emu is chasing a male in order to mate, and this is the time to gather emu eggs for food, as they are not yet fertilised. In June-July, the Dhinawan points towards the horizon – the male emu sits on the eggs, waiting for them to hatch, meaning that the cold winter has come. When the male emu appears to stand up off the nest and is busy raising chicks, spring has arrived. Late in the year the Dhinawan sits low on the horizon at sunset, searching for water in the waterhole, signifying the lack of water in the hot, dry summer. Encoded in this one constellation, moving through the sky throughout the year, are lessons on the seasonal change in the weather, the life cycle of an animal and the time to gather food.

In the Torres Strait, Dr Hamacher was taught by the locals that the best time to go fishing is at a quarter moon, and to avoid going on a full moon or new moon. The Torres Strait Islanders understand the link between the moon phases and the tides: during a full or new moon, the combined gravitational pull of the sun and the moon produces higher tides, and greater variation between high tide and low tide. This has the effect of churning the water, making it harder to see the fish. However, during quarter moons the sun and moon are perpendicular to the Earth, resulting in shallower tides, less churning, and making it easier to spot fish.

Another fishing lesson imparted on Dr Hamacher while in the Torres Strait was that “if the bright stars look blue and fuzzy, don’t go fishing, and start planting – it’s going to rain soon”. With his background in astrophysics, he considered what the science behind that warning could be. Looking up at the night sky, the bright stars appear blue when all the other bandwidths of light are absorbed by humidity in the atmosphere. The higher humidity also refracts the light of these stars, making them appear fuzzy, and correlates to a higher likelihood of rain, which is why the Torres Strait Islanders have used twinkling stars as a predictor of rain for generations.

Dr Hamacher believes that these stories and traditions are something to be shared and hold great value in the world of science. As a non-indigenous, American researcher, however, he doesn’t believe that he is the best voice to share them and feels uncomfortable being termed an “Aboriginal astronomy expert”. He therefore encourages and is training the next generation of scientists with Aboriginal heritage. Currently he is working with four scientists of Aboriginal heritage from diverse language groups: Karlie Noon (Kamilaroi) at The Australian National University, Krystal De Napoli (Kamilaroi) at Monash University, Kristen Banks (Wiradjuri) at the University of New South Wales, and Wily Stevens (Murruwarri) at Sydney Observatory.  Krystal will join Dr Hamacher to co-present some of their research at the RSV on the 20th of April, and we look forward to watching all of these students become the rising stars of Aboriginal Astronomy.

After a decade of learning about the extent of Aboriginal astronomy, and how previously it has been dismissed and largely ignored by many scientists, Dr Hamacher left us with this advice: “Just shut up and listen!”