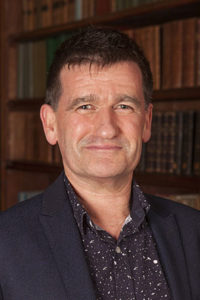 Dr Kevin Orrman-Rossiter grew up fascinated by science. His early interests involved a telescope, geology pick and a chemistry set and a childhood aspiration to become an astronaut. This matured into studying physics at RMIT and obtaining a PhD from the University of Salford in the UK. His research in materials physics has resulted in publications, as well fellowships and grants from the UK Ministry of Defence (Royal Signals & Radar Establishment, Malvern), the UK Science and Engineering Research Council and the Australian Research Council.

Since returning to Australia as an ARC Queen Elizabeth II Fellow, Kevin has spent more than 20 years as an industry research scientist (Amcor Research & Technology Centre), as well as in corporate strategy, marketing and consulting roles. At present Kevin works in the Research, Innovation and Commercialisation portfolio at the University of Melbourne supporting and managing engagements between the university and industry and government bodies.

Kevin’s early fascination continues through active membership of the Royal Society of Victoria, as well as a rekindled academic interest in the impact of science in our society. Kevin was elected to Council in 2016 and has assumed the Chair of the Society’s Science Program Committee in 2017.