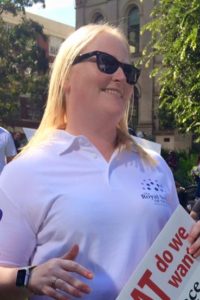 Dr Julie Boyce is a geologist and Assistant Lecturer with the School of Earth, Atmosphere and Environment at Monash University.

Following her love for archaeology to undergraduate studies, Julie discovered geology, a varied subject with endless learning opportunities, and the thrill of studying volcanoes. She attained a Master of Geoscience at Keele University in her native United Kingdom, conducting research on the welding of pyroclatic air-fall of the Middle Pumice eruption in Santorini, Greece, along with an internship with the Mineral Sciences department at the Smithsonian Institution in Washington D.C.

Julie is fascinated by Victoria’s Newer Volcanic Province, forming the Western Plains of our state, a region still considered volcanically active in geological terms. She has identified up to 23 ‘new’ volcanoes in Victoria in the course of completing a PhD in volcanology and geochemistry with Monash University. As an Outreach Coordinator for her School, she has focused on lesson plan development by science students for secondary and primary schools and was a part of the small team that developed the amazing Monash Earth Sciences Garden, telling the geological story of Victoria with a landscaped installation of rock types, soils and plants, reflecting what Earth scientists typically encounter in the course of their fieldwork. This work has been extended through development of a new Augmented Reality project, Monash Rocks, bringing to life 125 million-year-old sedimentary rocks containing polar dinosaurs; 380 million-year-old, highly explosive caldera volcanoes; and small, explosive and effusive volcanoes from Victoria’s active volcanic province.