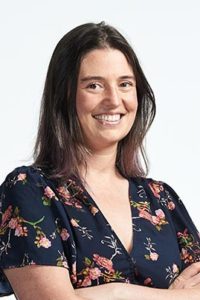 Dr Catherine de Burgh-Day is a research scientist working in seasonal prediction at the Bureau of Meteorology, involving a combination of software development, product development, and research in atmospheric science and oceanography. Much of her recent work has focused on the forecast of extreme weather events for aquacultural and agricultural industries in Australia and New Zealand.

Growing up on a Tasmanian farm with a family of volunteer observers for the Bureau of Meteorology, Cat attended the University of Melbourne with the intention to major in meteorology. However, it took just one semester with an incredibly inspirational first-year astrophysics lecturer to set her on a different trajectory, eventually completing her physics PhD by developing a new technique called Direct Shear Mapping, measuring weak gravitational lensing using the velocity maps of rotating galaxies. On finishing her doctoral studies, Cat called on her skills as a data scientist to apply for jobs in all sorts of fields; epidemiology, banking, and consulting. She was weeks away from starting a job at NAB when she was offered a job in the Bureau and ended up coming full circle back to her original interest.

Catherine was a joint winner of the RSV’s Young Scientists Research Prize for the Physical Sciences in 2015, and was first elected to the RSV Council for a 2018-19 term. Dr de Burgh-Day was elected as Vice-President of the Society from May 2021.